BINA in the Neighborhood (“BINA Bashchuna”) aims to revitalize and empower underprivileged communities, with an emphasis on culture and education. Activities are facilitated by young Israeli adults (Garinei Nachal) who live communally in the neighborhood being served and combine community work with Jewish learning. Our method is deep-rooted in Jewish values of community and mutual responsibility with Jewish identity and Jewish pluralism at its core.

Between 70-100 young adults join BINA Bashchuna every year to live, volunteer and study in underprivileged neighborhoods for a period of 6 months to one year and afterwards throughout their military service (“garin nahal” military track). They engage in social action in the neighborhood and participate in weekly study sessions which expose participants to ancient and modern Jewish texts and issues of Jewish culture, Zionism, social justice and identity. These groups form the basis for communities of young secular Jewish Israeli adults who immerse themselves in study and social action and strengthen their commitment to social justice and community leadership, influenced by Jewish values. This program fosters a Jewish context for understanding and grounding social action and nurtures young leaders with a stronger sense of both Jewish identity and social responsibility. BINA Bashchuna participants work in schools, community centers, after school care programs, and other local community-based organizations to benefit thousands of children, youth and elderly in underserved neighborhoods every year.

Which is greater,study or action? Greater is study which leads to action 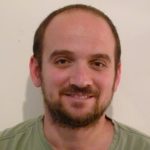 Uri Carmel was born in Argentina, grew up in Ashdod and served as a paratrooper in the IDF. He holds a BSW in Community Social Work from Ben-Gurion University in the Negev. Uri was a shaliach for aliya and education in Brazil on behalf of JAFI and Habonim-Dror movement. He worked as coordinator of BINA’s Community Initiative in Beer Sheva and today is director of BINA’s Social Justice and Community Department (BINA Bashchuna) with responsibility for 14 communities from Beer Sheva in the south to Yokneam in the north. He is currently working towards an MSW at Ben-Gurion University in the Negev. Uri and his wife are members of “Kama”, a collective community of social-activists in Beer Sheva, where they live with their two children.